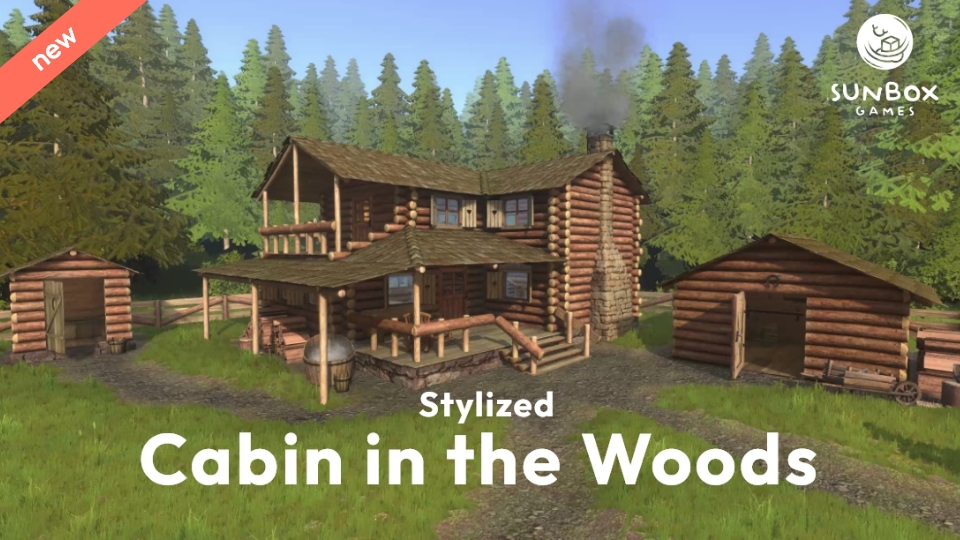 Introducing highly detailed stylized pack of cabins with various props. Use these assets to easily create and furnish log cabins in nature settings. These assets are best used in FPS games in open world levels. Assets are optimized and were made using Universal Render Pipeline (URP). You can easily convert them to HDRP or built-in render pipeline if needed.

Get Cabin in the Woods Assets at:

Our task over the past two months has been to create an asset pack for a forest cabin that includes both interior and exterior props. Inside the forest cabin, we wanted to create a cozy, old, somewhat dusty feel, the warmth of a working fireplace. 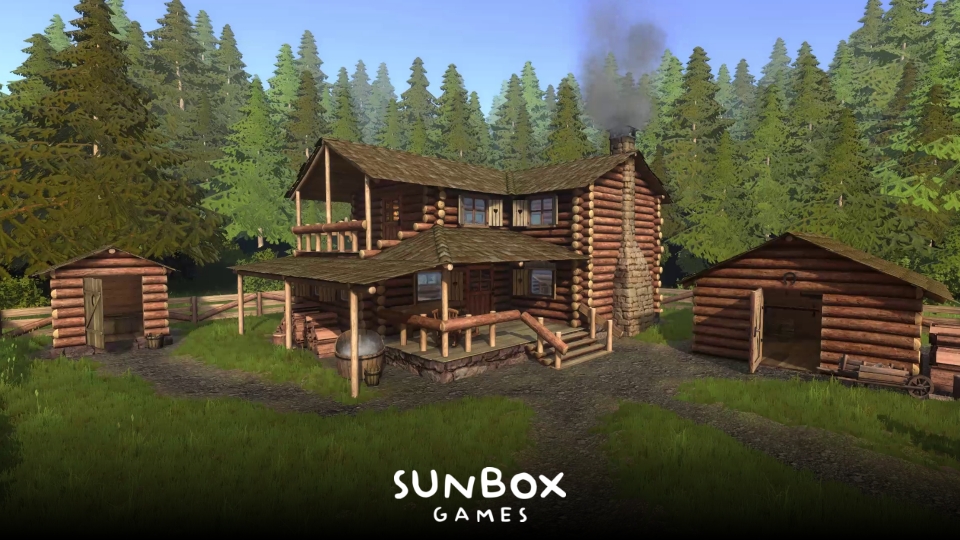 As for the exterior, we managed to give it quite a colorful set of props where the work around the cabin meets the relaxation in the wooden bathtub or outer fireplace.

We started with a fairly extensive mood board and began sketching variations of the selected props. Once the design was selected, we proceeded to model the objects. After consulting with the mentor and a lot of back-and-forth shuffling and tweaking, it was a satisfaction to open the finished model in Substance Painter, where we breathed life into the objects by giving them textures. As newcomers to designing game props, Žiga and Barbara had a few complications when inserting the props into the Unity scene, but nothing so major that our mentor Andrej could not have solved it. 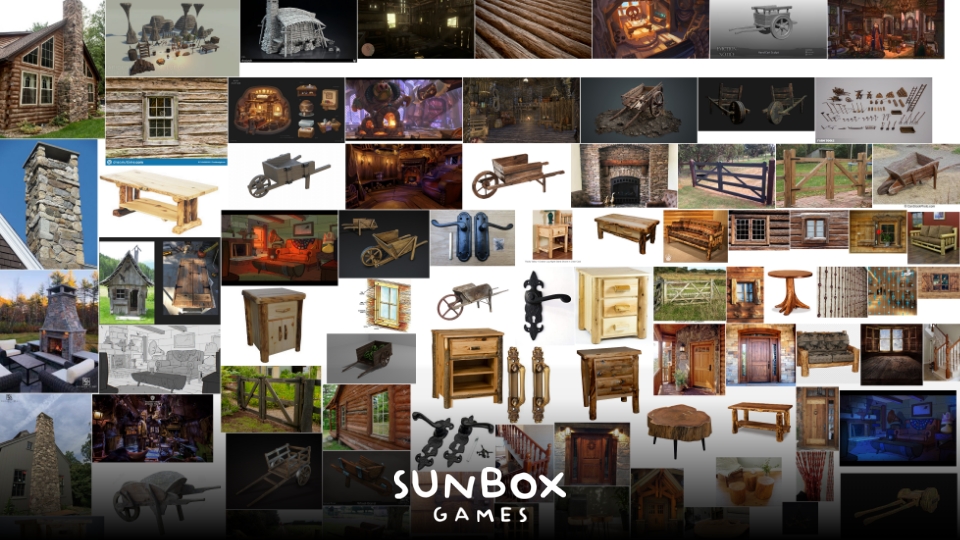 Andrej created the layout of the terrain and modeled 3 cabins, a shed, an outhouse, and a few other props, while Žiga and Barbara designed the interior and exterior props. For every prop package we created, we had to check in the scene of the Unity demo version and correct or tweak colors or textures that did not fit until we were fully satisfied visually and technically. 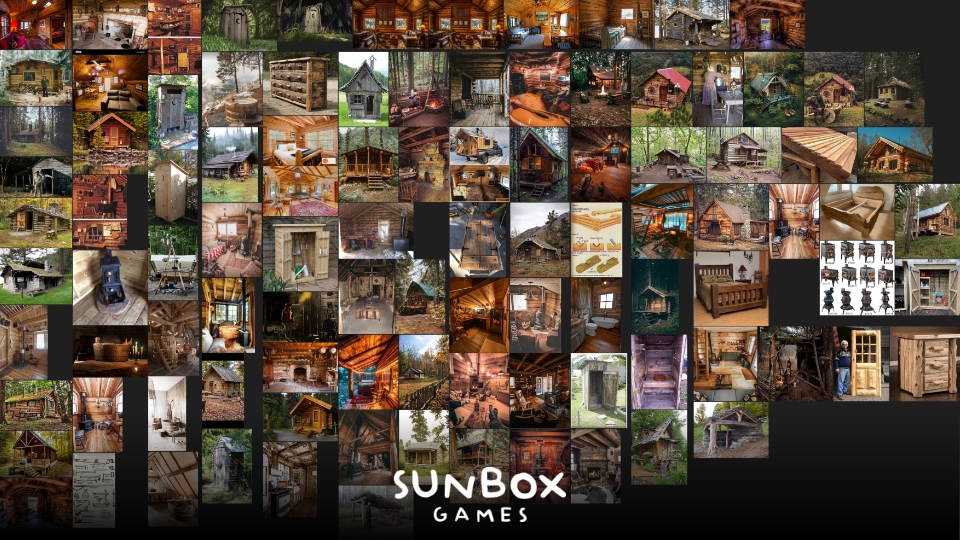 Since the order in which projects are created is very important, right at the beginning we created the organizational files intended for concept art, modeling, texturing, and final Unity projects. For the first folder - concept art - we focused on various shapes of selected objects. Even though we were not creating and discovering new waters in design, we still needed to focus on certain details. 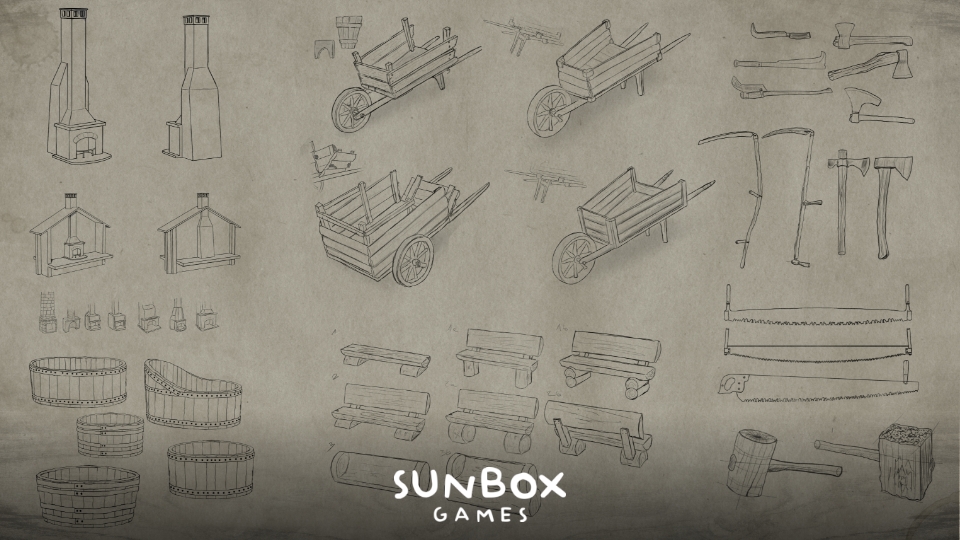 For example, the first prop we designed was a kettle and we had to do a little research on what types of kettles there are - what shapes of spouts exist, how round the belly/base is, what material we need to draw on the handle, etc. So for each object, we made about 3 to 5 sketches and different details. After the sketches were done, we chose a set of props, then we collected interesting designs of the sketches and modeled an object out of them. 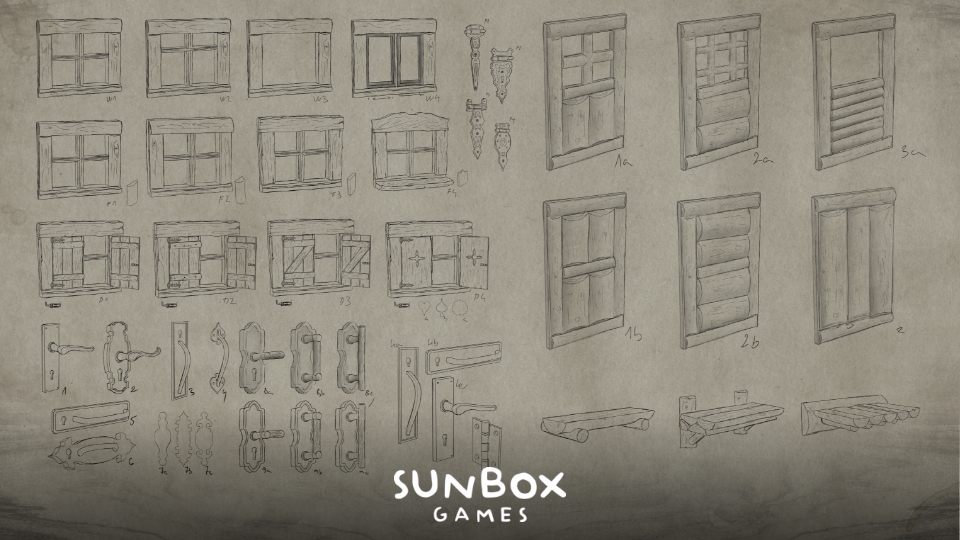 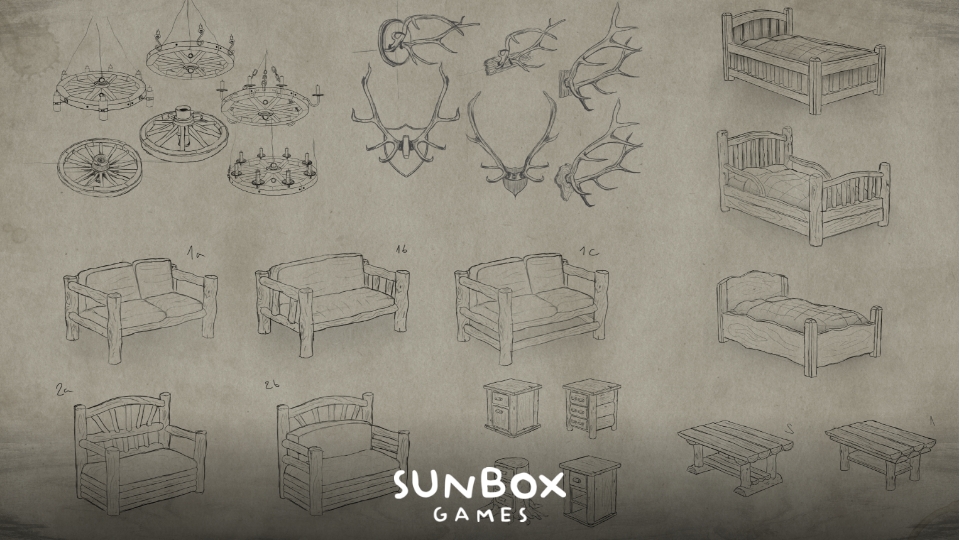 Moving on to the next folder - modeling (Blender). First, look at the sketches and think about what basic shapes and what kind of mesh we want to use; is it a cylinder or a cube, maybe a torus - and if so, how many vertices do we choose so it will be optimized for a game usage, as a low-poly model, but still looking pretty detailed.

After I have selected the basic shape, another challenge comes, namely, how do I assemble the meshes? For example, should we extrude the faces to keep them in one mesh, or should we add another mesh? So we had to make playful adjustments when modeling. It was helpful to look at the object in parts and then get an overall view. Build on the shapes. This helped us a lot with more complicated objects like a hanging light fixture or a stove with a chimney.

After the back and forth of checking the model, there is only one more step in Blender - the UVs. The UVs are also interesting because you need to recognize and understand the shapes, and you need to know if the object is made of, for example - wood so that the UVs rotate in the direction of the wood lines. At the end of modeling, all that remains is to prepare the object for texturing. This includes checking the transformations, the normals, and the hierarchy, providing the model with one or more materials if necessary, and finally exporting it as an fbx file. 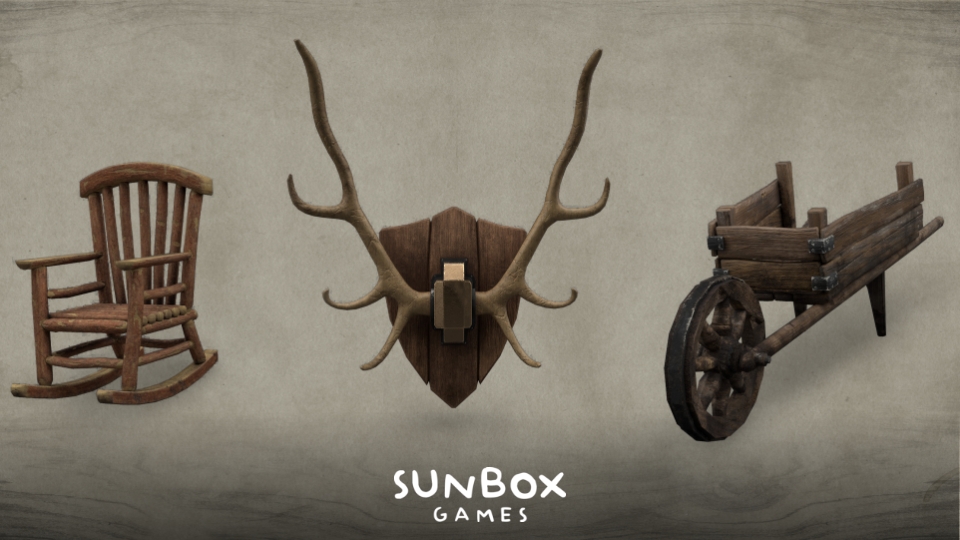 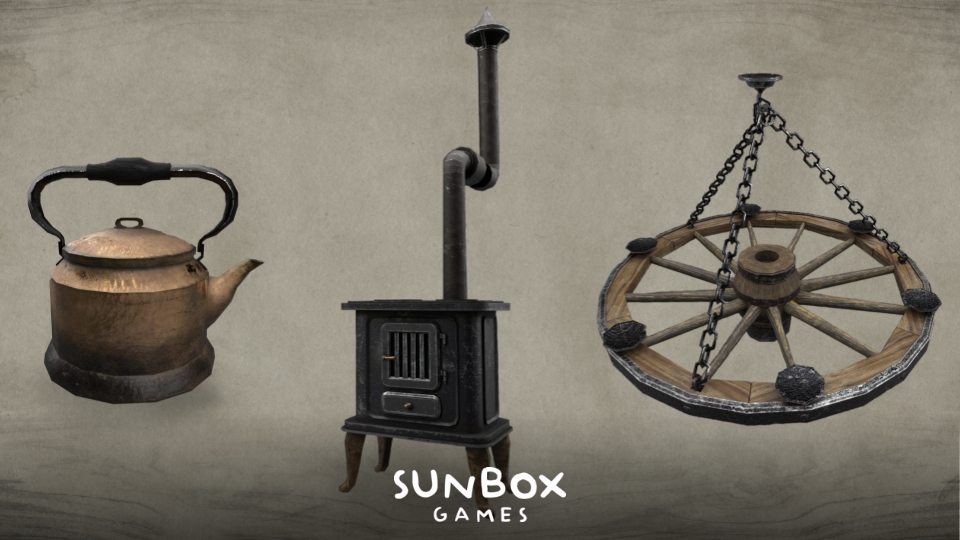 For the texturing, we used Adobe Substance Painter. We combined similar models into batches, so they would share the same UV space and could be textured all together at the same time. Most of our models were textured directly after the modeling stages, but a few required baking of custom normal maps from high poly meshes. We did this mostly with models that had soft parts on them (bed, couch etc.), so we would retain the control over the meshes that sculpting allows but still keep the models simple enough to avoid having to do manual retopology.

If baking from high poly was not necessary, we simply baked low poly models onto themselves, so we could speed up the process with generators later on. Most of our materials came from Substance's online library, which we later tweaked to match our product. The idea was that this is a cabin made by an older man that decided to live out his retirement in the forest, so the materials had to look a bit weathered and rustic but not too old or too damaged since all those props and buildings are still in daily use and are regularly being taken care of and maintained.

It was a challenge to make them look just right as there is a fine line between things looking weathered and used yet not seeming to be abandoned or neglected. The goal was to create a cozy and friendly-looking environment, that would seem inviting to a player and avoid any kind of spooky vibes that are often associated with lonely cabins in the woods. We really had to be careful with how much dirt and scratches we put on the models so that everything made sense and looked aesthetically pleasing at the same time while keeping the production on schedule, which was probably the hardest part since it is so easy to get lost in the details while working and completely lose track of time until you realize that there is way too much work yet to be done to be spending so much time on a particular batch of models. 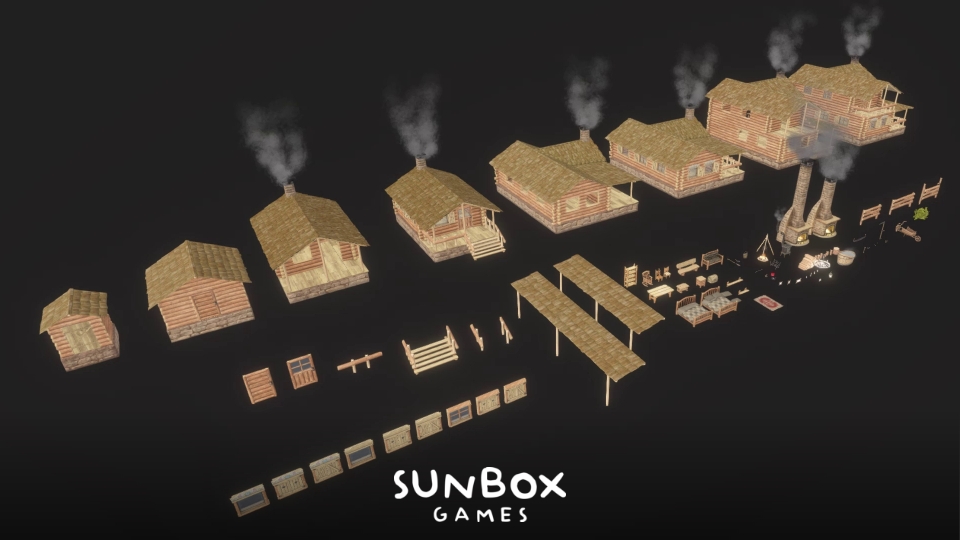 The final steps in the production of the assets happened in Unity, where we had to make the models work inside unity’s universal render pipeline. First, we had to check everything was done properly in the modeling and texturing stages, so we would not run into problems further down the line. When we were completely sure that the models are scaled and shaded correctly, the pivots are in the correct places and completely matched with the colliders, all normals are facing the right direction and there is no non-manifold, loose, or duplicated geometry we exported everything into a workbench scene for the creation of the prefabs and further testing.

If everything seem to work and look good, we proceeded with creating materials. Based on the dominant materials in the model, we decided to either go with specular or metallic pipeline. If everything was fine, we then had to link the colliders to their meshes and combine different models into final prefabs that we would eventually pack into packages and send for final tests in the main test scene. If things still worked fine and looked good there, we could finally consider the models done and ready to make an appearance in the games of our users. 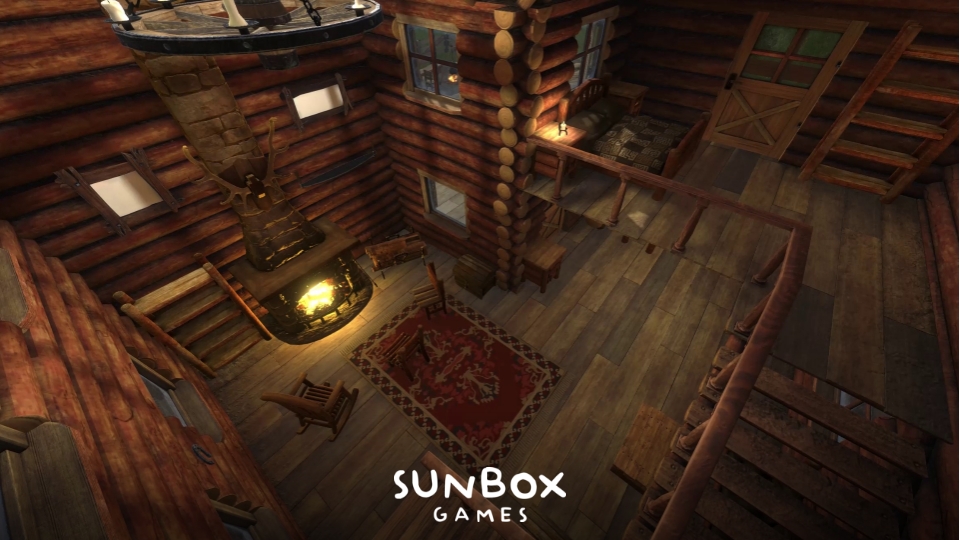 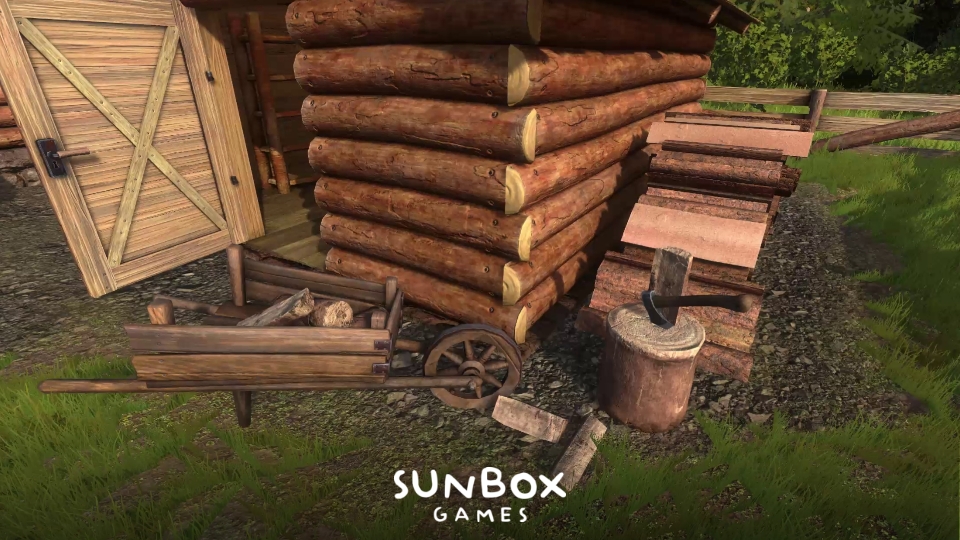 Get Cabin in the Woods Assets at: